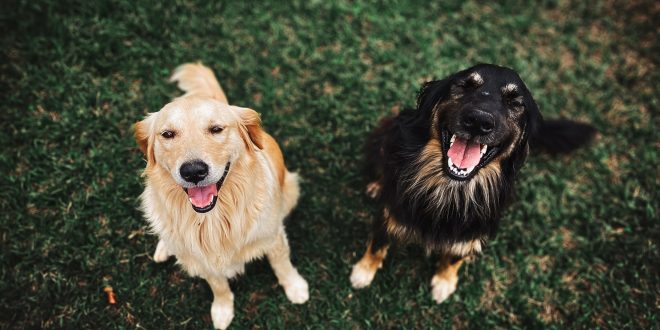 Are Golden Retrievers Good With Other Dogs?

Golden Retrievers are known for their affectionate personality toward their owners. But are Golden Retrievers good with other dogs, too? Thanks to their friendly demeanor, Goldies can get along with other pets, be it a dog, cat, or other furry animals. In fact, the companionship with another dog will also benefit Golden Retrievers since they are prone to separation anxiety.

However, you have to introduce your Goldie to the newcomer properly. While these dogs are gentle and versatile, forcing the first meeting will create a negative experience for your resident canine.

In this post, I will discuss how Goldens get along with other dogs, how you should introduce them, and the best breeds to consider for your second doggo.

Are Golden Retrievers good with other dogs?

Golden Retrievers are one of the superstars of the canine kingdom. They are absolute charmers, so there’s no doubt that they are AKC’s #4 most popular dog breed of 2020.

Goldies are an all-time favorite among pet owners. This is mainly due to their friendly, gentle, and eager-to-please personality. They are also quite tolerant dogs who won’t mind tight hugs from toddlers.

When it comes to multi-canine households, Golden Retrievers won’t be a problem. They adjust and thrive in almost every living setting as long as you have a yard where they can play.

1. They were bred to be companions.

Golden Retrievers were bred as companions to hunters. They love being with people and other animals, so they won’t mind having another dog at home. Also, this level of socialization tracing back to their ancestors make Goldies such a well-rounded dog.

2. They are tolerant dogs.

Golden Retrievers can tolerate the annoying behavior of puppies and energetic dog breeds. If trained and raised well, your Goldie will have the patience of an elephant. They can also put up with roughhousing and barking.

Golden Retrievers find social interaction fun. If introduced properly, they will see the second dog as an adventure buddy. This breed is incredibly trusting and will warm up to a new dog quite fast.

One quality that makes Golden Retrievers popular is their intelligence. It’s the same reason why they are the top pick for service work. When raised in a multi-canine household, Golden Retrievers can be trained to accept new pets easily. They are very receptive, especially when given food rewards and affection.

As mentioned earlier, Golden Retrievers are notorious for separation anxiety. If you’re always leaving your dog behind for hours, it might be a good decision to get a second dog. The two dogs can keep each other company, which is a win-win situation for you and your pets.

6. They are good-natured dogs.

Golden Retrievers tend to be attached to the people and pets around them. Raising them with a second dog won’t be a big problem as long as you get the right breed pairing.

Potential problems when introducing a dog to Golden Retrievers

Introducing a second dog to your resident Goldie comes with some complications. After all, Golden Retrievers are still animals, so you have to expect these potential problems:

Golden Retrievers are large canines that can weigh around 55 lbs. to 75 lbs. If you’re introducing an adult Goldie to a small puppy, the large size for the former can pose harm to the smaller newcomer. Golden Retrievers are gentle, but they can get overexcited and overeager to meet their new friend. This is why supervision is very important.

2. They can get jealous.

Golden Retrievers form a strong bond with their owners. So if you suddenly brought home a pup, your resident doggo can get jealous. This can become a bigger problem if your Goldie feels like he’s not receiving much attention. Your dog will become whiny and sulky.

3. They are not well-socialized.

Golden Retrievers that aren’t well-socialized will become aggressive towards the new dog. Whether you’re planning to get a second dog or not, it’s crucial to socialize your Goldie as early as possible. This will dampen aggressive tendencies, which will help your dog become well-disciplined and less anxious.

Tips in introducing a Golden Retriever to another dog

The good news is that Golden Retrievers are easy to introduce to a new dog. As long as they are well-trained and well-socialized, your Goldie will acclimate to the new canine in just a few weeks.

Here are some tips to make the process much easier for you and your dog:

✔️Set up a meet-and-greet with someone else’s dog

Before you brought home a new pup, it’s best to test the waters by inviting someone else to bring their dog. This way, you can see how your Golden Retriever will react when seeing another pet. Take note that this step is very important if your dog is used to being the only pet.

Occasional growing is normal, but make sure that your dog is leashed to prevent dogfights. Whenever your Goldie is exhibiting a negative response to the other dog, call its name as a distraction. You should also give a reward if your dog stopped the unwelcome response.

Once your new dog is home, you should set up separate ‘territories’ for each of the animals. I suggest placing these areas on opposing sides of your home to prevent conflict between the two dogs. Also, you should put up tall baby gates to serve as a physical barrier.

Allow the two dogs to sniff each other on both sides of the baby gate. Remember that canines recognize each other by sniffing butts. Let your dogs do the sniff work, but watch out for growling, leaping, and biting.

Another important thing you should avoid is forcing your Golden Retriever to share resources with the new dog. Doing so is a recipe for resource aggression since the Goldie will see the newcomer as a competitor.

You should provide separate food bowls, toys, beds, brushes, and basically every dog item. This will prevent heated encounters between the two dogs.

During the first actual meeting of the two dogs, make sure that your Golden Retriever is leashed. You should ask someone to hold the leash while you restrain the new dog on your arms.

Let your Goldie approach the new dog slowly as you observe its behavior. If your dog bares its teeth, growls, and raises its hackles, you should stop the interaction right away. Let your Golden Retriever calm down before you resume the meeting.

Over time, your resident dog will acclimate to the presence of the new pup. Still, you should keep their first interactions short to prevent untoward incidents. You should also end the meeting while the two dogs are still in a good mood.

Positive reinforcement does wonders if you want your Golden Retriever to get along with another dog. Like many breeds, Goldies are food-driven. You can use this ‘weakness’ to help them see the new dog as a member of the pack.

During their meetings, you should reward your Golden Retriever with its favorite treats. Always hand the food to its mouth instead of tossing it to the floor. Tossing the treat may cause both dogs to run after it, which will end up in a dog fight.

By rewarding your Golden Retriever, you’re teaching him that the presence of the other canine is a positive experience.

However, if you’re feeding the two dogs, make sure that your resident dog gets to eat first. This shows your Goldie that he still has the upper position in the pack.

Are you still undecided as to what breed to accompany your Golden Retriever? The following dogs might be the best options:

Are Golden Retrievers good with other dogs? Yes, this breed can get along with almost any dog. Just make sure that you pair them with a breed that matches their personality and temperament. With the proper introduction, your Golden Retriever will form an unbreakable bond with your new dog.

Tom Thorpe has overtime interacted with different species of dogs mostly through breeding and training; according to him, man’s best friend is yet to find solace in the company of man, as they are continuously mistreated. He, therefore, runs a rescue center that provides shelter to stray dogs, and has been advocating for the rights of animals; the Golden Retriever dogs are among his favorites, the reason he came up with the extensive excerpts to help educate the society on the right treatment and care of the respective breed. Tom spends most of his time running his dog shelter; he is a husband and proud father of two boys and loves to go fishing during his free time.
Previous 5 Best Flea Medicines for Golden Retrievers (Topical Options)
Next What Vegetables Are Good for Golden Retrievers – The Golden Veggie Diet