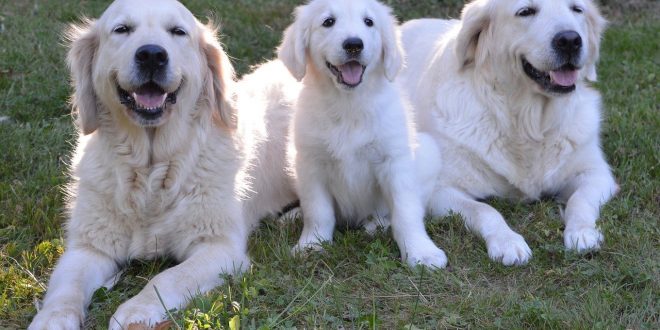 Male and female Golden Retrievers have a lot of differences. First of all, males are on the larger side since they are about two to four inches taller than their female counterparts.

In terms of affection, male Golden Retrievers are observed to be more attention-seeking than females. However, this is often tied to the processes dogs undergo throughout their life.

Aside from that, some female Golden Retrievers will become less affectionate after giving birth to a litter. This is because the dam (mother dog) is in defensive mode to protect the puppies. While this isn’t an absolute case for all female Goldies, it happens frequently.

Another thing that makes male Golden Retrievers physically clingy is their sex drive. From craving for pets and kisses, your male Goldie will suddenly hump legs.

Nevertheless, this behavior isn’t always sexual in nature. It can also be due to play, stress, excitement, and compulsive disorders.

While male Golden Retrievers are observed to be more affectionate, there’s a catch. They are extremely energetic as well. This behavior can be too much to manage, especially if your dog isn’t fully trained.

Of course! Your choice of dog shouldn’t be limited to the canine’s gender. There’s more to Golden Retrievers than their biological sex.

While female canines may not always be amenable to cuddles, pets, and physical affection, they still excel in many areas.

Female Golden Retrievers are observed to be more independent than males. Still, it doesn’t mean that they are invincible to separation anxiety.

Aside from that, female Goldies are calmer and slightly easier to train than their male counterparts. It’s a good trait for pet owners who are looking for a well-mannered dog. You can also expect females to mature faster than males.

Female Golden Retrievers have a different way of showing their affection than males. They are still cuddly dogs, but they may walk away once they had enough.

Female Goldies won’t go above and beyond just to please their owners. This is because female Golden Retrievers aren’t always hungry for the reward of attention.

Both male and female Golden Retrievers are excellent family pets. While they have differences in the level of affection, both of them thrive as companion dogs.

Aside from that, both genders are kid-friendly. However, male Golden Retrievers may not be suitable for very young babies due to their stubborn and energetic nature.

Nevertheless, it’s all about assessing the personality of the specific dog you have. Training will also play a big role here.

Male and female Golden Retrievers are easy to train, though males may take a few more tries to remember a command. Overall, both genders excel as working dogs and therapy dogs.

Which one should you choose?

If you’re unsure which Golden Retriever gender to choose, the following aspects of their personalities will help you decide.

As mentioned earlier, male Goldies mature slowly. This means they take longer to calm down, which can be unsafe for children. With that, female Golden Retrievers might be a better choice.

Moreover, female Goldies tend to be observant around children. Some will even become protective, especially if they already had a litter before.

Overall, female Golden Retrievers are still playful and fun to be with. But unlike males, they are less likely to go overboard with roughhousing.

Fixing a male Golden Retriever is much easier than spaying a female. With males, neutering can be done right after the dog reaches puberty.

Also, the operation is much less invasive since the vet only has to remove the testicles. An incision will be done on both testicles to detach them from the dog’s body.

Meanwhile, spaying a female Golden Retriever is more complicated. The vet will have to remove the Goldie’s uterus, ovaries, and fallopian tube. It’s an intensive surgical procedure that will cost more than neutering a male.

Aside from that, the vet will have to factor in the heat cycle, weight, anesthesia sensitivity, and overall health of the female Golden Retriever.

If a female Goldie is left unfixed, it will continue to experience heat cycles every six months on average. This makes the dog a magnet for male canines.

A heat cycle will also result in hormonal shifts in your dog, which can make it grumpier than usual. However, there are female Goldies that become clingy when they are in heat.

Aside from the behavioral changes, heat cycles are also messy times. Your female Goldie will have various vaginal discharges. Most of them are bloody, quite similar to human menstruation.

You have to put your female dog in a doggy diaper to prevent the discharge from getting into furniture and carpeting.

Male Golden Retrievers can reach a maximum height of 23 to 24 inches. Meanwhile, females are slightly shorter at 21.5 to 22.5 inches. While the difference is small, it will be a big deal if you live in a small house.

Take note that the Goldie’s size will affect your choice of a crate, bed, pads, and other dog items. Nevertheless, aspiring Golden Retriever owners don’t really mind the size difference.

Lastly, and it’s something you should know, is that male dogs hump. Whether it’s a Golden Retriever or not, a male dog will hump legs. Worse, it might be your guest, which can be quite embarrassing.

Even neutered Goldies will hump, but the likelihood is much lower than their unfixed counterparts.

For the most part, humping is of sexual nature among dogs. It’s often accompanied by pawing, licking, play bows, erect tail, and other affectionate gestures.

But as mentioned earlier, this behavior can also be triggered by strong emotions like excitement, stress, and playfulness.

A: The gender of the Golden Retriever has little to do with how protective it will be. If raised as protective canine, both genders will exhibit such behavior. Nonetheless, many pet owners say that females are more territorial than males, which can lead to protective behavior.

A: Male Golden Retrievers are known to be more affectionate than females, but they can still exhibit aggressive tendencies if not raised well. Aggression often branches out from violence, negligence, and poor training on the part of the owner.

A: Male Golden Retrievers mark just like any dog. Neutering may help reduce its occurrence, but it will not fully eliminate spraying or marking. If your male Golden Retriever is suddenly marking, it’s important to assess the situation to eliminate the potential triggers. Belly wraps will also help a lot here to prevent your furniture from smelling like dog piss.

Q: What are the three types of Golden Retrievers?

A: Golden Retrievers are usually available in three types: English, American, and Canadian. Most of the differences are in the coat appearance, size, and overall body composition. Nevertheless, the three types share most Golden Retriever traits.

Q: Do female Golden Retrievers love to be hugged?

A: All Golden Retrievers love hugs and kisses. However, females may not be as obsessed with it as males. Still, it doesn’t mean that female Golden Retrievers aren’t affectionate. They just happened to be more independent than male Goldies.

Are male or female Golden Retrievers more affectionate? Males are observed to be more affectionate than female Goldies, but it doesn’t mean the latter isn’t a great canine. Take note that the gender of the dog is just one of the determining factors of getting a pet. Beyond the sex of the canine, you should also think if you’re really ready to raise a Golden Retriever.

Tom Thorpe has overtime interacted with different species of dogs mostly through breeding and training; according to him, man’s best friend is yet to find solace in the company of man, as they are continuously mistreated. He, therefore, runs a rescue center that provides shelter to stray dogs, and has been advocating for the rights of animals; the Golden Retriever dogs are among his favorites, the reason he came up with the extensive excerpts to help educate the society on the right treatment and care of the respective breed. Tom spends most of his time running his dog shelter; he is a husband and proud father of two boys and loves to go fishing during his free time.
Previous 12 Best Golden Retriever Breeders in the Midwest
Next How Many Puppies in A Litter of Golden Retrievers?