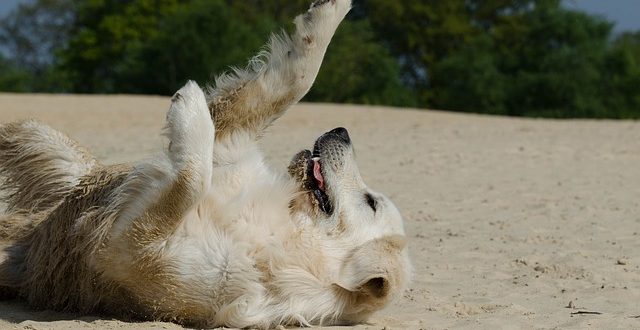 Do Golden Retrievers Have Dewclaws – Discovering the Golden Part

Part of the dog’s grooming routine is the trimming of their nails. Doing this, you will notice the nails that actually don’t appear like nails within their paws. That nails are the so-called dog’s dewclaws. So, knowing this, you might be wondering, do Golden Retrievers have dewclaws? What are they and what are their main functions in the Golden Retrievers body?

In this blog post, we will discuss this mysterious part of the dog’s body. We will try to discover if they are really worth being there or they should be taken out from the dog’s body. So, if you do not want to procrastinate your curiosity about these dewclaws, then let’s start reading…

Do Golden Retrievers have Dewclaws: What is it?

Unfortunately, some people assume that dewclaws are useless and just an attachment to the dog’s paws. Because of that, it should be removed as it may be a cause of dog’s accidents and pain. Yet, this is not really true. Dewclaws still have some functions.

Do Golden Retrievers have dewclaws? The answer is yes, the Golden Retriever is one of the dog breeds that include dewclaws on their foot anatomy. Since the location of the dewclaws is on the side of the paws, they generally don’t touch the ground. That’s why many believe that the dewclaws are nonfunctional.

However, even so, dewclaws still offer some usefulness. For the Golden Retrievers, the dewclaws are only present on the front paws. And here are the functions of the front dewclaws:

The absence of dewclaws may lead some dogs to higher chances of stretching and tearing of the carpal ligaments. Generally, the end result of this stretch and tear is laxity and arthritis as the dogs grow old. Moreover, this may generate more stress or pressure over the dog’s elbow, carpus, shoulder, and spine. That usually happens because the dog’s body is trying to compensate for the lack of digits on its legs.

Reasons for Calling them Dewclaws

Theories and assumptions behind the birth of the term ‘dewclaws’ are ever-present. Yet, the most common one and known to be the first theory behind dewclaws is that the said dog part never touches the ground. Even so, it gets in contact with the grass’ dew making it called the dewclaw. The dewclaw was first seen on dogs in the year 1570 and the real meaning of it is unknown.

However, removing the dewclaws is generally based on personal preference. And, it highly depends on the negotiation of the owners and breeders or breeders and the vets. But, why do they need to remove the front dewclaws, if, in some instances, it still has some use? Here are the reasons for the said removal:

*Assumptions that dewclaws in the front paws are non-functional

Because of the anatomical structure of the dewclaws that it doesn’t necessarily touch the ground many people believed that it does not have any use upon standing. That’s why it must be removed and such removal would not greatly affect the Golden Retrievers in any way. For some dog breeds with rear dewclaws, they are really non-functional as the dewclaws there are not directly connected with any tendons on the hindfoot.

*Breeders think that pet owners may miss cutting of the dewclaws

Actually, the breeders have this concern about the risk associated with the dog’s nail starting to embed or rip. This usually happens when the pet owners forgot to cut the dewclaws of their doggo during the dog’s nail trimming.

*To achieve a cleaner front look

There are breeders and pet owners who see the dew claws as a distraction to the overall appeal of the dog. So, in order to get that distraction out and have a cleaner look, the dewclaws on the front paws should be removed.

*The risk to acquire injury or ripping of the dewclaw

Some people believed that the dewclaws are great potential to have the risk of ripping. One way of preventing the possible injury that may arise due to that ripping is to remove it.

Golden Retrievers Dew Claws – Should it be removed?

The dewclaws of the Golden Retrievers are the ones responsible for digging into the ground in order to provide support and balance to the dog. This is actually important during their running activity. The Golden Retrievers also belong to the group of working dogs. They are exceptionally qualified for that task because of their calm, reliable, and attentive traits.

Being working dogs, the Golden Retrievers must be agile to be able to have sharp turns at high speeds. With this turning movement, their dew claws are extremely important for them, again, to have balance and support. In case their dew claws had been removed, they will face a potential risk of acquiring injury during missions.

For the Golden Retrievers, their dew claws act to avoid the stretching of the carpal ligaments on their front legs. In case the dewclaws are absent, it would generally lead to carpal hyperextension injuries. This condition is actually common in larger dog breeds like the Goldens. Moreover, the development of arthritis from the tension that would be calmed by the dewclaw is generally high. This is most likely true for active dogs with dew claws already removed.

Reasons for not removing dewclaws of the Golden Retriever

Dewclaws are actually important for the Golden Retrievers. Since they are active dog breed, they may able to join agility sports. During this event, the dewclaws act to improve some sharp turns and the slipping on certain jumps. With that, they may achieve a big difference in their scores.

Generally, dog’s joints instability, forelimb swelling, and limping are the symptoms of carpal hyperextension injuries in Golden Retrievers. This condition can be treated by reconnecting the carpus. The surgical procedure of carpus reconnection involves placing the steel locking plate within the forelimb of the Golden Retrievers. Spanning the wrist joint is actually the main goal for this and you need to wait for about twelve weeks as its rehabilitation period.

Other Dog Breeds with Dew Claws

Below are the top ten lists of dog breeds with dew claws:

How to Treat Dewclaws Injuries

The risk of injuries anticipated to acquire from the dewclaws is very rare, yet they may probably occur. Since dewclaws are part of the paws and have nails, keep in mind that this dog’s body part may be pulled off partially or completely. There may also times that this nail may be broken, infected, or split off. Usually, it all happens when the nails are not properly trimmed.

Once the dewclaws get injured or infected, the Golden Retriever may generally feel extreme pain. With this, an assessment of the veterinarian is highly required. The vets have the knowledge of properly removing the damaged nails or trim down any ingrown. They may also use sedation if necessary. Moreover, they may also prescribe medications such as antibiotics and pain relievers.

Preventing Injuries of the Dewclaws

Since the removal of the Golden Retriever’s dewclaws is debatable, it is still advisable not to remove it. In case you are worried about the risk of the dewclaws getting injured, here are some of the helpful tips that you may consider to avoid it:

Basically, having and maintaining short nails of the Golden Retrievers may prevent them from having dewclaws injury. Similar to the other nails on the dog’s paws, the nails of the dewclaws should also be trimmed on a regular basis. However, because of the anatomical position of the dewclaws that do not generally touch the ground, the natural process of wearing down the nails is not achievable.

The occurrence of ingrown usually happens due to untrimmed dew claws nails. This will also become a risk factor for having an infection on the dog’s nails. Moreover, not trimming down the nail may also result in the development of longer quick. With that, maintaining the proper length of the nail would become very difficult.

Additionally, long dew claws may have the higher potential of catching things and dirt and may then get injured. With well-managed nails, dew claws injuries may rarely occur.

How about for the missing front dewclaws? Well, since we already know that Golden Retrievers do have dewclaws because it also has some functions, the absence of it requires the dog to have conditioning exercises. Provide your Goldens with exercises that generally strengthen the scapular muscles within the dog’s shoulder.

Here are some good examples of exercises that you may provide to your pooch:

Complications would possibly arise while removing the dewclaws improperly. The best solution is to go straight to the veterinarian and let him do the procedure safely and accordingly.

Q: DOES A DEWCLAW HAVE A QUICK?

A: Although not considered as nails, dewclaws also have a quick. Once you cut that part, it will eventually bleed and may cause pain to the dog. In case the dog’s dew claws color is white or clear, you will obviously notice the quick inside the nail. Every time you do the cutting of the dog’s nail, ensure that the dewclaws have been properly maintained.

Q: HOW MUCH DOES IT COST TO REMOVE A DEWCLAW?

A: Usually, once decided to remove the dog’s dewclaws, the process should start as soon as they are a puppy. The dewclaws removal for each pup and examination fee on the puppy will incur specific charges. The cost generally ranges from $30 to $40 per puppy and it may cost higher as the practice varies. Moreover, dewclaws removal may also be done on the later part of the dog’s age through a surgical procedure that basically uses general anesthesia.

Q: CAN DEWCLAWS GROW BACK AFTER REMOVAL?

A: Removing dew claws basically requires the removal of the whole nails including the root. It should be cut off or else, the nails may possibly grow back.

Moreover, it is very important to know that you are exposing your Golden Retriever to a higher risk of injury which generally requires expensive surgical treatments. The best thing to do with this is to inspect the nails of your Goldens on a regular basis. With that, you will highly ensure that your dog may not have too long nails and it won’t bother them at all.

Tom Thorpe has overtime interacted with different species of dogs mostly through breeding and training; according to him, man’s best friend is yet to find solace in the company of man, as they are continuously mistreated. He, therefore, runs a rescue center that provides shelter to stray dogs, and has been advocating for the rights of animals; the Golden Retriever dogs are among his favorites, the reason he came up with the extensive excerpts to help educate the society on the right treatment and care of the respective breed. Tom spends most of his time running his dog shelter; he is a husband and proud father of two boys and loves to go fishing during his free time.
Previous 10 Things to Buy For Golden Retriever Puppy – Essentials HERE!
Next How Much Does a Golden Retriever Cost Per Month – The Golden Budget Guide!