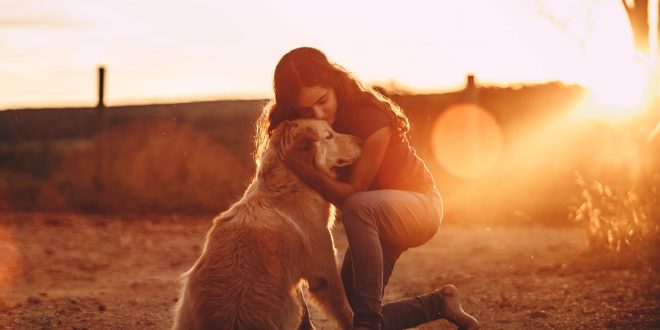 Do Golden Retrievers Love Their Owners? Here’s the Truth

Golden Retrievers are known to be affectionate and friendly. But the question is this: do Golden Retrievers love their owners? The key here is knowing some signs that your dog actually loves and adores you. While any Goldie will love to play with everyone, there would be some things that they will only do to the people they love.

Do Golden Retrievers love their owners? 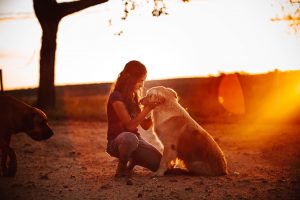 There’s a good reason why dogs are called ‘man’s best friend’. They build deep and strong bonds with their owners over the years. As much as we love our Goldies, they love us back, too.

But don’t they just love us because we give food and pets? While this might be the case for some, A study found that dogs react positively to their owners’ scent. Such a reaction triggers the release of happy hormones associated with love, comfort, and happiness.

Dogs are like kids; they will let you know if they like you or not. Although Golden Retrievers can’t speak, their body language says a lot about how they feel about a person. You just have to read the signs.

If you’re wondering if your Golden Retriever loves you, the following signs point to yes:

🐕They are protective of you

Your Golden Retriever loves you if they are willing to defend you against harm. They will bark and try to intimidate anyone who looks shady. As their favorite human, your pooch will try to drive any danger away from you. However, since they are Goldies, don’t expect them to charge and bite.

However, this can also be the other way around. Scared Golden Retrievers may hide at your back when there’s imminent danger. It means that your dog trusts and loves you. They know that you are bigger than the fear they feel and that you can protect them from anything.

Golden Retrievers are Velcro dogs in large packages. They love being with people, especially the ones they love. Your pooch will not leave your side, even if you have to go to the bathroom.

Goldies do this because they want to make sure that you are fine. Also, they find your presence comforting so they prefer being your shadow around the house. You mean a lot to your Goldie so they love being with you as much as they can.

A Goldie that loves you will look at you lovingly in the eyes. This gesture forms a deep bond between you and your dog. It also releases a happy hormone called oxytocin, which makes the pooch feel good.

When dogs lock eyes with a person, they are usually calm, engaged, and safe. However, if the dog locks eyes with another canine, it’s often a sign of aggressiveness.

You should also observe the body language of your pooch while it’s locking eyes with you. It should be quiet, calm, and the body isn’t stiff. 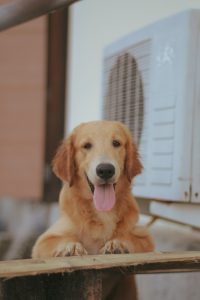 🐕They go crazy whenever you go home

One way to know if your dog loves you is it goes mad the moment you open the door. In dog time, a human hour is equivalent to seven hours for canines. So if you’ve been gone for an 8-hour work shift, your Goldie feels like you’re away for 56 hours.

Your Goldie will jump and wag its tail excessively. It will also lick your face and exhibit an overexcited behavior.

However, you shouldn’t encourage this reaction. It’s important to train your Golden Retriever to not jump to people who open the door.

🐕They show you their belly

A Golden Retriever’s belly is one of the vulnerable parts of their bodies. If the pooch offers it to you, that’s a sign that he trusts and loves you. The pooch expects that you will pet and shower him with love.

Your dog will also roll and lie down on the ground with its chest in the open.

🐕They lick you a lot

Dogs give kisses by licking you. This is an ingrained instinct since canines in the wild lick other dogs to recognize that they are part of the pack.

Licking is also a habit of dogs that they do to their puppies. This means that the pooch is actually considering you a family member and therefore loves you.

Dogs lick their bodies to clean themselves, although it’s not as rigorous as with cats. They will also try to clean their owners as a way of keeping them safe and healthy.

🐕They lean on you

Dogs lean on people they trust and love. It’s their way of seeking comfort, especially when they are scared or anxious. They also do this around other dogs to claim you as their human.

Aside from that, your Goldie leans against you to solicit affection. The pooch is probably waiting for you to wrap your arms around them. This can be a learned behavior, too, which can be followed by eye-locking. The next time your pooch leans on you, they can make use of an ear rub or some pets. 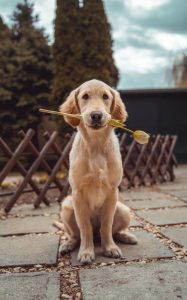 🐕They bring “gifts” to you

If you own a Golden Retriever, you know exactly why they are called ‘retrievers’. They love picking things up and bringing them to their masters.

Some Golden Retrievers will also bring “gifts” to their owners. This happens a lot if there’s a sudden change in the household, which could mean that the owner is stressed, sick, or sad. The said gifts can be anywhere from your dog’s favorite toy, your used socks, dried leaves, or a branch.

Like a loved one, Goldies bring gifts to make their favorite human feel better.

🐕They sleep next to you

You’ll know that your Golden Retriever loves you if it sleeps right next to you. Sleeping is a very vulnerable time for dogs since they can be attacked anytime. So if they prefer dozing off beside you, it means that the pooch trusts you enough to protect them against intruders.

It can also be a protective behavior. Your dog sleeps next to you so they will be on guard in case danger ensues.

However, you shouldn’t encourage your dog to sleep on your bed. Goldies are large and they can easily disrupt your sleep cycle. It’s best to give this pooch his own bed where it can relax and rest.

🐕They get jealous of other dogs

Lastly, a Golden Retriever that loves you will get jealous if you pay attention to other canines. For the most part, Goldies are like kids. If you give affection to another child, yours would become jealous.

Jealousy is a sign that your dog wants you for his own. But as much as this is cute, you shouldn’t tolerate this behavior. Soon enough, jealousy can lead to overprotectiveness and aggression.

It’s important to socialize your Golden Retriever with other dogs and people. This way, the pooch will not become jealous and overprotective.

Do Golden Retrievers love their owners? Since this breed is affectionate, it’s not that hard to win their hearts. You just have to care for them so the pooch will return the love to you. Just note that trust and affection are earned so you should spend time with your Goldie as much as you can.

Tom Thorpe has overtime interacted with different species of dogs mostly through breeding and training; according to him, man’s best friend is yet to find solace in the company of man, as they are continuously mistreated. He, therefore, runs a rescue center that provides shelter to stray dogs, and has been advocating for the rights of animals; the Golden Retriever dogs are among his favorites, the reason he came up with the extensive excerpts to help educate the society on the right treatment and care of the respective breed. Tom spends most of his time running his dog shelter; he is a husband and proud father of two boys and loves to go fishing during his free time.
Previous Things to Know About the Golden Retriever Tail Length
Next Pros and Cons of Neutering My Golden Retriever 2020