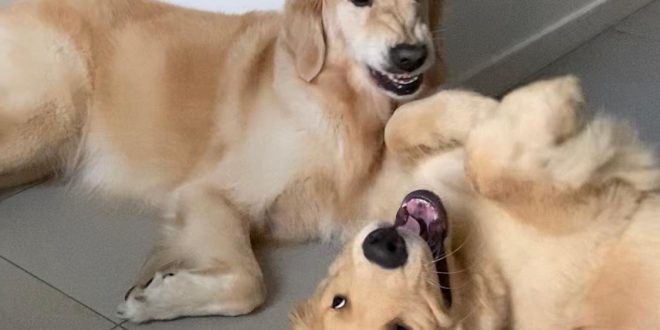 That said, why does your golden retriever snarling or growling? Possible reasons are anxiety about what’s to happen, pain, fear, being dominant, or protecting food or other possessions. These are just some of the few, but we will further look into this behavior further as we move along.

Golden Retrievers are a calm-looking dog breed as if everything is fine in their world, known for being affectionate, and being close to everyone (even for a stranger). This is the main reason why they are an excellent fit for being the best family dogs on the planet.

These dogs are active dogs. So they enjoy more with a lot of physical and mental activities, not to mention strenuous activities. Also, they are adaptable to almost all lifestyles.

However, if they are not properly trained and not properly socialized while they were puppies, their behavior might not be what the majority of the people think. Instead, like any other canine breeds who were not trained properly, they might become aggressive and will not be as cheerful, happy, affectionate, as they seem to be.

Moreover, it’s really hard to picture the golden retriever snarling or growling. Although given the fact that they still have their innate wild instincts drawn from their wild dog ancestors it’s likely that behavior will come out but not often. On the other hand, below are the common characteristics that golden retrievers possess.

Young Golden Retrievers ages 0 up to two or three years old often have high energy as if it’s endless for them. With full of vim and vigor, they can even outmatch the energy level of their pet owners. Their energy is obvious especially when they are starting to explore and try something out of their mouth be it food or your pieces of furniture. If you have raised a golden retriever puppy before, you very well know what it feels like to raise those pooches.

However, when adulthood strike in their life, their behavior will change over time, although they will are still an active dog not compares to when they were still young. Adult golden retrievers have usually a calm demeanor, slow to anger, and really act mature. Their temperament changes and will prefer more nap time than outdoor activities every now and then.

Because they are highly energetic dogs, they needed some release of their excess energy by way of exercising and providing them mental stimulation. Golden retrievers originally bred and raised as hunters of waterfowls and known to retrieve the birds shot by the hunters. They also have a large amount of energy.

Aside from being calm and friendly, it’s no surprise that Golden Retrievers are among the smartest canine breeds on the planet. That said, they are fourth on the list according to Dr. Stanley Coren’s book, The Intelligence of Dogs. Golden puppies are easy to train from basic obedience training to complex training such as tricks, fetching, and even for service dogs. Because of their nature being bred as hunting dogs back in the old days.

That’s why you will notice that there are pet owners who prefer Golden Retrievers as their guide dogs. Especially, for persons with disabilities. Moreover, they are also perfect as service dogs be it search and rescue and even sniffing dogs.

They are Friendly Towards Other Animals

Goldens really get along with other pets and animals, be it rabbits, cats, and other dogs. As long as they have been properly trained or at least trained with proper socialization, they are going to treat their fellow creatures with love and affection.

In fact, they can be a perfect companion with other breeds. These are Beagle, Peekapoo, Maltipoo, Goldendoodle, Pug, and Basset Hound. But sometimes they will be dominant to other animals will somehow hurt them due to their medium-sized stature. More importantly, if they aren’t properly socialized. Although generally golden retrievers are kind to both humans and other pets in your household.

But of course, you wouldn’t let any bad events that will lead to your dog’s aggression. Because you are among the examples of being a responsible pet owner. That said, golden retrievers act inappropriately on such rare occasions only and it’s not in their genes or structure be become aggressive.

Cuddling is what they want from their master

Given that the Golden Retrievers are generally affectionate, they want to cuddle from their master or other family members as if it gives them a reason to live. This kind of character is what makes them the best pillow other than your pillow. They will not be angry if you want to sleep beside them. Also, most of this breed will be at your side or even your child’s side because they are also children-friendly. And that’s what makes golden retrievers great.

But are there any behavioral problems that Golden Retrievers have like snarling or growling?

Golden Retrievers Snarling Due to Frequent and Harsh Punishments

If you are a responsible pet owner, you will never treat your golden retriever any harsh punishments in a frequent manner or never in your dog’s lifetime. I know it’s part of the pet’s owner’s obligation to punish him if there are some wrongdoings but you will never resort to any harsh treatment.

So, this might be the factor that causes your golden retriever snarling.

Golden Retrievers are gentle giants and rarely they will turn into aggressive behavior. If, for some instance, they begin to snarl or growl for unknown reasons, there could be an underlying root cause as to why they act differently. One factor to look at is the fear of aggression. Although when golden retrievers feel they are in grave danger or feels threatened by human or other dogs, they likely become unusually quiet. But in the long run, this unusual quietness can turn into violent reactions like snarling or growling.

Fear aggression or simply instilling fear in your golden retriever is not a good idea. Why would anyone plant fear in their pet dogs in the first place? But if you do, you are doing harm than good here. They might even bite you instead of snarling at you.

Also, being left alone for too long is one of the reasons why your golden retriever is snarling at you. The fact that their mental health has affected turning into something agitated and irritated. There’s no problem leaving them alone only if it’s just a few hours, and make sure that it will not be frequent.

To prevent any mental health issue or snarling at you, let a family babysit your golden retriever if ever you are going out for long hours.

It Could be From Pain

Some simple explanation why your golden retriever is snarling is because of the pain induced by injury. It’s a common response for any dogs to growl or to snarl when they are hurt. But growling and snarling may not be common for golden retrievers but if any behaviors such as snarling or growling, there’s something bugging them and it must have hurt so bad.

Feeling anxious about what’s about to happen

Your golden retriever could also be frightened of something that’s about to come that is causing him to snarl or growl. Sometimes dogs have defense mechanisms and that includes growling and snarling especially when potential danger arises. Some of these aspects are caused by moving on into a new location where your pet is unfamiliar with the place.

So, if ever your dog is feeling anxious and something irregular is going n with his behavior, be sure to attend to his needs. Also, there’s some anti-depressant treatment for anxiety be it natural or medicated.

Some of the reasons why your golden retriever is snarling is due to their dominant behavior. Although it’s uncommon for golden retrievers to become dominant to humans and in other pets. Cases like this often show up when your dog is in its early training especially to those adult dogs who aren’t properly socialized early on.

That’s why it’s important to train your golden retriever during his puppyhood. Even though goldens are one of the easiest to train, there’s no guarantee that they will obey you at the beginning stages of training. That said, they may snarl or growl at the trainer.

How To Stop Your Golden Retriever’s Snarling

Train not to snarl

Discipline is one of the foremost keys to prevent any snarling. Always give your golden retriever positive reinforcement just to ease the training progress. It’s important to give them dog treats or toy every time your dog accomplish the task. Dog treats are the best companion in order for your golden retriever to train easily. That said, this will make him comfortable and his attitude will gradually change from being aggressive to calm. But it will take time for them to become a responsible pooch.

As previously mentioned above, one of the causes why your golden retriever is snarling is because of the pain she is suffering. If it’s snarling, maybe it’s too painful and that she’s reacting in uncommon behavior. The best thing you can do is to immediately take your pooch to the vet just to rule out any possibility of being injured.

Curious about: How Many Puppies in A Litter of Golden Retrievers? Check this out!

Tom Thorpe has overtime interacted with different species of dogs mostly through breeding and training; according to him, man’s best friend is yet to find solace in the company of man, as they are continuously mistreated. He, therefore, runs a rescue center that provides shelter to stray dogs, and has been advocating for the rights of animals; the Golden Retriever dogs are among his favorites, the reason he came up with the extensive excerpts to help educate the society on the right treatment and care of the respective breed. Tom spends most of his time running his dog shelter; he is a husband and proud father of two boys and loves to go fishing during his free time.
Previous How Many Puppies in A Litter of Golden Retrievers?
Next Obedience Trained Golden Retriever