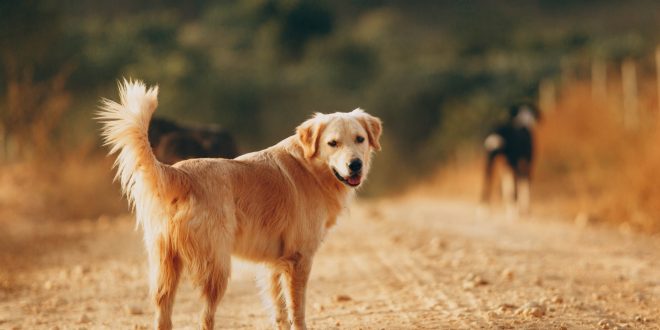 Things to Know About the Golden Retriever Tail Length

Golden Retrievers have long and strong tails that seem to have their own life. It wags like crazy whenever the pooch is excited. Contrary to what others believe, tails aren’t just fancy extensions of a canine’s body. It plays an important role in their movements as well as body language.

For this post, we will discuss Goldie’s tail length, its tail language, and potential problems you may face. 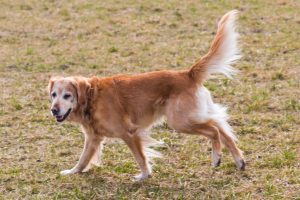 Golden Retrievers have a tail that’s anywhere from 3.5 to 12 inches long. However, it will vary on how feathery the tail would be.

For example, the Red Tail Golden Retriever has a lesser feathery tail as compared to show quality Goldies. Still, Red Tail Goldies have longer tails than the former.

In general, the Golden Retriever’s tail should extend up to the hock but not longer than that. Also, different types of Goldies have subtle differences in their tail lengths. In the end, all of it wags strongly and can topple things around the house.

Since Goldies can’t talk, they often use their body parts to communicate. Their tail is one of the most expressive, which will tell you how the pooch feels. Below are some of the dog tail body languages you should learn:

The most common tail activity is wagging. While wagging is perceived as a happy gesture, it may not be true all the time. A nervous dog may wag its tail as a way to release its tension. But if the wagging is paired with tippy-tappin’ and a seemingly smiling expression, we can say that such behavior is a happy one.

Golden Retrievers that tuck their hairy tails between its legs is nervous, scared, or submissive. Dogs do this to compress their most vulnerable body parts away from predators. If your dog exhibits this behavior, it’s important to assess the environment and see what’s causing it.

Also, you should try to calm your dog down to reduce its stress. But if the pooch is baring its teeth, you should proceed with caution as it can snap and bite. 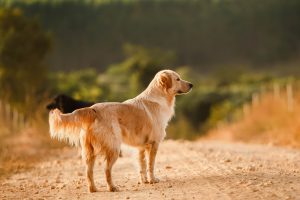 A natural tail position is relaxed and held in a neutral position. It’s not tensed, raised, or lowered too much. Some relaxed Goldies will carry their tails low so it depends on the personality of the dog.

A Golden Retriever that holds its tail up high is dominant and not afraid. This can happen if there are other dogs around that they find threatening. Also, if there’s a stranger that’s freaking your dog out, the pooch may raise its tail as a warning sign that he’s not okay with the person’s presence. But knowing Golden Retrievers, it won’t take much time for them to acclimate to a stranger.

Like all body parts, a Goldie’s tail may experience problems. It’s important to address this so it won’t spread on other body parts.

The Golden Retriever tail length varies, but it will usually be long enough to reach the hock. Aside from knowing the length, you should also address potential problems that may affect your Goldie’s tail. The help of a veterinarian is important to keep your pooch healthy and in the best shape.

Tom Thorpe has overtime interacted with different species of dogs mostly through breeding and training; according to him, man’s best friend is yet to find solace in the company of man, as they are continuously mistreated. He, therefore, runs a rescue center that provides shelter to stray dogs, and has been advocating for the rights of animals; the Golden Retriever dogs are among his favorites, the reason he came up with the extensive excerpts to help educate the society on the right treatment and care of the respective breed. Tom spends most of his time running his dog shelter; he is a husband and proud father of two boys and loves to go fishing during his free time.
Previous 5 Best Bones for Golden Retriever Puppies
Next Do Golden Retrievers Love Their Owners? Here’s the Truth