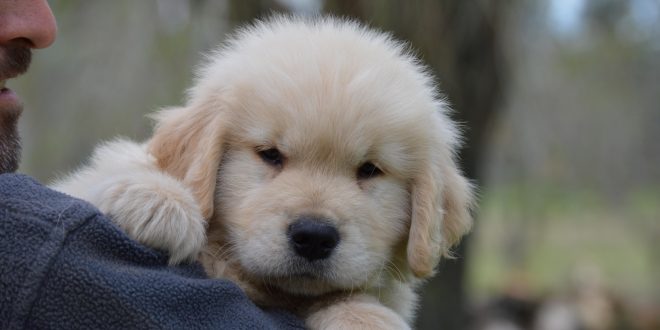 How Many Puppies in A Litter of Golden Retrievers?

Have you ever wondered how many puppies in a litter of golden retrievers? 2? 4? 6? Sometimes we really can’t help but to think about this matter. Although it’s not a trivial thing to know, because you still need to know in order for you to somehow get some knowledge. That said, if you have a female golden retriever and someday you want to let her have some litter, you are prepared and able to calculate some expenses beforehand. It’s better to have an educated guess than nothing at all.

In this article, I will attempt to cover the question regarding how many puppies in a litter of golden retrievers. Also, I’ll try to give you some tips about having a golden retriever litter for first-timer pet owners.

Time and again, we always say that golden retrievers are a one of a kind canine breed. The fact that they are the friendliest, affectionate, energetic, and stranger to none, these reasons are what makes the golden retrievers popular and it will become one for many years to come.

Furthermore, the golden retriever’s litter size will vary for different reasons wherein we also discuss in a bit. Interestingly enough, the largest litter size was produced by a Neapolitan Mastiff back in 2004. Lo and behold, the mother dog produced 24 litters of puppies and that’s according to Guinness World Records. On the other hand, the largest litter ever produced by a golden retriever is 17 albeit there are no official records, only online sources that only appeared.

With that, golden retrievers are capable of producing a litter between 1 to 17 young pups. We can safely assume that golden retriever breeds have an average litter size of 4 to 8 puppies. For most instances, the first litter size is somewhat smaller compared to succeeding litters.

Another important fact you should keep in mind is the ratios of females and males differ. Other litter will have more females than males, while in some, males are more. In addition, there is a small chance that the puppies are of one gender only.

Every canine is different from the other, although they have some commonality if we are going to categorize them according to their breeds. But still, they have different genetic structures and they are all individual creatures. This also includes the litter size. The most common observation in regards to litter size, if the mother of your female golden retriever produces in large litter size, chances are, your female dog also will produce a large litter size. That is, of course, assuming some factors remain constant.

In relation to the litter size, keep in mind that the majority of the traits largely came from a dam (female dog) and the small percentage came from the sire (male dog). The sire has likely had an influence on the litter size. Among the sire can influence are health, age, size, breed, and genetic structures.

At some point, the gene pool diversity will somehow affect the litter size. This again will vary from dog to dog. If the dog has a big gene pool, the bigger the dog’s litter will become. The fact that canine who are drawn from diverse backgrounds tend to have large litters. That means that if the dog has been inbred extensively, there’s a possibility that the litter may decrease.

Another factor to consider is the diet. It’s amazing how your golden retriever’s diet can affect the litter size. That’s why some breeders are feeding their dogs the highest quality kibble food and also premium quality dog supplement with vitamin-rich and protein foods (meat and cheese) to produce a large litter. Compared to dogs fed with substandard kibble food and supplement. A great diet, not only it will affect the increase of the golden retriever’s litter size but also the overall health of the litter once born.

Again, health plays a crucial role. That’s why both pet owners and breeders need to make their golden retrievers be in excellent health condition. This is because they can somehow affect and have a chance to have more puppies.

That said, if the golden retriever is not healthy enough, it will inevitably affect the litter size. An ideal healthy weight for golden retrievers is usually slim, and those who are overweight are prone to health issues. Thus, giving a routine exercise and a well-balanced diet has a possibility to produce in larger litters. Also, it’s best to have your golden retriever have a more protein diet and a high-quality kibble food to ensure their overall safety as well as the litter’s size.

Age also plays a significant role in the golden retriever’s litter size. More particularly in the case of a male dog. Male dogs who are 5 years old and above have a smaller sperm count than those who are in ages 5 years and below. This means the litter size will also decrease. That’s why the ideal age for stud dogs is 5 years and below because their sperm count is large and it’s easier for the sperm to enter the egg cell of the female dog.

This is the reason why dog breeders who have dog show quality are often bred extremely and intensively in order to produce as many quality female dogs as possible. However, even if that’s the case, there’s a downside with the breeder’s method, and this can lead to popular sire syndrome.

Age of the female golden retriever

As much as the male golden retriever’s age can significantly affect the litter size, so does the female golden retriever. But, it has a more major point in influencing the size of the litter size than the male and this is actually quite true. That means, dogs over the age of 7 years will have a greater chance to produce large litters than those of young age under 5 years of age. However, female golden retrievers shouldn’t be bred too old or too early. Usually, the first litter regardless of age will likely be smaller than the succeeding production of litters to come.

Also, a female golden retriever who was never been bred until the age of 5 will have a tendency to produce smaller litters that are permanent. Meaning, even after the succeeding litters, it’s possible that the production of litters will be small. On that note, the ideal age of female golden retrievers where there is a yield in litter size is between the age of 2 to 5 years.

Don’t forget that even the breed of the dog makes a huge difference in the number of litters being produced. Generally, the larger the breed, the larger the litter size. In the case of golden retrievers, the average size of litter rangers from 4 to 8 and other dog breeds like Spaniels. Smaller dog breeds like Terriers have small litter sizes and it’s usually 2 and the maximum is 3.

Can Pet Owners Affect the Size of a Litter?

The fact that genetics and other various factors in dogs alone have the possibility to increase the litter size, all these factors lead to a different outcome and are somewhat related. But can humans influence or somehow affect the size of a litter? Is there any correlation regarding this? The short answer is yes, but to a certain extent only.

The long answer is, although yes, there are no guarantees as to how much can humans change the course of the litter size. Fortunately, there are things that humans may likely increase the odds.

In today’s, technological advancement, and science being the forefront of technological progress, there are some breeders who have taken the interest in artificial insemination. In fact, breeders who are using artificial intelligence are becoming even more rampant. Thanks to the ai, the chances of finding champion dogs both in the US alone and abroad are getting bigger.

However, artificial insemination does not produce large litter sizes. Instead, it only produces a small litter size. Moreover, the kind of semen will largely affect the litter size regardless if it is frozen, chilled, or fresh. In addition, canine sperm will likely die because their semen does not freeze well.

The best possible and simplest way to (somewhat) affect the litter size of your golden retriever is just to have the best possible care. Nothing more nothing less. It’s simple enough but it’s the best you can do to increase its litter size. Obviously, any dogs who lack proper nutrition and have an imbalanced diet will greatly decrease the chance of having a large litter size.

If the golden retriever has improper housing and has nutrient deficiencies, they can absorb puppies due to lack of care.

So, see to it that your female golden retriever has everything they need. Make sure to not miss any appointments in their scheduled checkups with your local vet. Give them proper nutritional needs and also groom them regularly.

The best way to secure a healthy pregnancy for your female golden retriever is to have her getting proper treatments. That means, getting treatments for fleas and worms should be consistent even while in pregnancy. This is because roundworms and hookworms can be passed to the puppies by their mother’s dog. That’s why it’s best to get your dog proper treatments.

Treatments and vaccinations are the most important and should be regularly maintained if necessary. Also, it’s an excellent idea that your dog needs to have an up to date vaccines prior to mating. This will guarantee that the antibodies are optimal while the female mother has a puppy bump.

Consult your vet with the best possible vaccines in order to keep your dog healthy. There is some vaccination that can be administered while your dog is in pregnancy.

Of course, without the help of exercise, your dog’s health will become unhealthy. The fact that pregnant golden retrievers or any dogs will feel become lethargic when the due is near. With having adequate exercise before their pregnancy, your dog will become fit and able to carry on while she has a puppy bump that is about to give birth.

Keep in mind that you don’t need to have your female dog undergo intensive training or even behavior training. This can lead to stress and other health condition that may greatly affect their pregnancy.

Keep in mind that they should stay fit and healthy plus groom them regularly. Because there’s no doubt that a healthy golden retriever will likely produce a large litter size.

Tom Thorpe has overtime interacted with different species of dogs mostly through breeding and training; according to him, man’s best friend is yet to find solace in the company of man, as they are continuously mistreated. He, therefore, runs a rescue center that provides shelter to stray dogs, and has been advocating for the rights of animals; the Golden Retriever dogs are among his favorites, the reason he came up with the extensive excerpts to help educate the society on the right treatment and care of the respective breed. Tom spends most of his time running his dog shelter; he is a husband and proud father of two boys and loves to go fishing during his free time.
Previous Are Male Or Female Golden Retrievers More Affectionate?
Next Golden Retriever Snarling: Here’s Why!