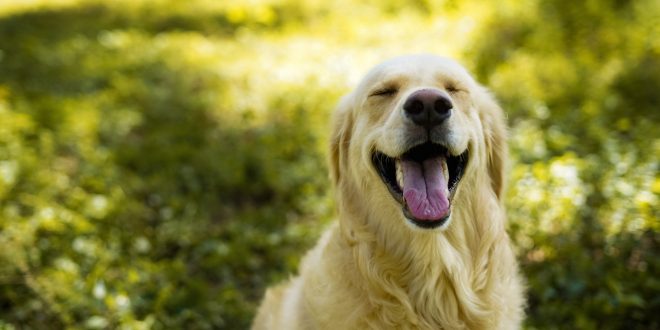 Golden Retrievers have feathers??? Yes, but not the kind they can use to fly. When it comes to Goldies, feathers refer to fur patches found around their belly, tail, and legs. This fur can grow very long and harbor dirt. This is why trimming Golden Retriever feathers is a necessary part of grooming. For this post, I will discuss a step-by-step guide so you can groom your pooch at home.

When do feathers grow on Golden Retrievers? 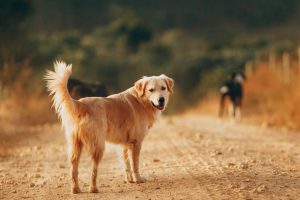 Golden Retrievers will shed its puppy coat to give way for the adult fur. This is also the same time when the feathers will sprout. In general, there’s no exact age as to when the feathers will grow on a Goldie, but it’s estimated to be around eight months. It will usually start growing once your dog reaches three months and become more and more visible over the next weeks.

By the time your Golden Retriever turns a year old, its feathers would have grown its maximum length. However, there are also some Goldies that will achieve its full feather length for a few more months after a year.

Overall, your Goldie’s coat will finally settle once it turns two years old. This is also the time when the pooch realizes its full adult size.

Moreover, you can actually speed up the coat transition of your Golden Retriever. Daily brushing will help remove loose hair so new ones will grow. Pin brushing is ideal for puppies. Don’t use undercoat rakes or deshedding tools just yet.

By removing the shed hair, you’re giving way to the growth of new ones. This will somehow speed up the growth of the adult coat as well as the feathers.

Color of a Golden Retriever’s feathers

A Golden Retriever’s feathers will have varying colors, depending on the hue of their coats. It can be anywhere from washed yellow to deep reddish-brown. Most of the time, it’s almost the same color as the coat or slightly lighter.

However, if your pooch has an extremely different feathering color than its coat, you should consult the vet. This is considered an anomaly and could be the product of improper breeding. While this condition will not usually cause a health problem, you should still raise the concern to the breeder, in case you bought your pooch.

The difference in Golden Retriever feathering 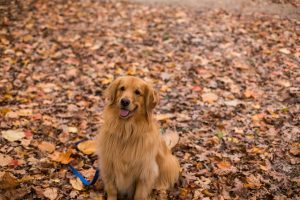 Golden Retrievers usually come in three different types: American, British, and Canadian. All of these pooches have the same personality, temperament, and size. They just differ on coat appearance among other subtle variations.

When it comes to feathering, the following are the differences between the three:

Regardless of what Golden Retriever type you have, it’s important to trim their feathers regularly.

When it comes to trimming a Golden Retriever feathers, you have to get the right tools. To start you off, you should get the following tools: 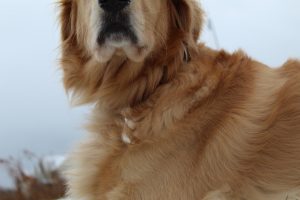 Before you start snipping through your Goldie’s feathers, it’s important to give it a good brush first. This will fix tangles and remove loose hair trapped on your dog’s coat. Be slow and gentle with it so your pooch won’t find grooming time traumatic.

You will notice around your dog’s legs that there are fuzzies or shed undercoat that you won’t get out by brushing. To remove this, you can use finger cots on your thumb and index finger. The rubber will help grab the loose undercoat and pull it without hurting the dog. It’s important to keep the pulling light and never pull intact fur.

Step 3. Start with the feet

Most commonly, a Goldie’s feathers will grow too long in the leg area that it starts touching the ground. You should use a pair of thinning shears to trim the excess fur growth on the paws. There’s no need to use clippers for this part.

You should also trim the feathering short from the Goldie’s foot up two inches up. This way, it will not gather dirt and dust outdoors. Trim it short until it’s the same length as the coat.

Do this on all four feet of your Golden Retriever. For the hock at the back legs, place the scissors parallel to it for a more natural look. The feathering around the hock should be cut short with the same length as the rest of the leg’s coat.

Step 4. Work on the legs 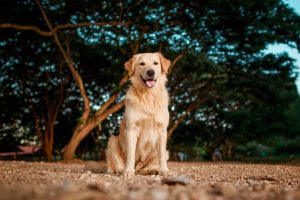 To trim the feathers on your Goldie’s legs, you should use a pair of thinning shears. Unlike scissors, thinning shears are composed of a blade edge and a comb edge. This way, not all the fur that gets into its edge will be cut off. It will also give the Goldie a more natural look.

To start, give the feather a nice comb then start snipping with the thinning shears. Stop after a few snips to comb the area. This will let you see how thin the feathers are getting. It will also let you achieve symmetry and balance with the trim.

As for the length, there’s no specific prescription, but it’s best to just remove the extra volume. You can watch the groomer do this to your dog. When in doubt, you can ask the groomer how much thickness you need to remove based on your Goldie’s fluffiness. But overall, you wouldn’t want the feathers to go too bald or thin.

Step 5. Proceed to the tail

A Golden Retriever’s tail usually has the most feathers. Try pulling your dog’s tail parallel to its body and you’ll see the silky, long fur. Comb this well until it looks regally groomed.

After that, use thinning shears to remove the excess length. You should shape the tail feathering as if it’s a large dog ear. While there’s no exact prescribed length, the tail feathering should be around 3 to 5 inches long. However, it depends on your doggo’s fluffiness. If you have a Canadian Goldie, this might be shorter.

Are you finding it hard to follow? To simplify the steps, dog groomer Chris Briggs demonstrates how it works in this video:

How often should I trim my Goldie’s feathers?

Your Goldie’s feathers need to be trimmed every month, depending on how fast it grows. Some Goldies will need a feather trim every two weeks, especially fluffy British types.

Usually, it’s best to trim it after the shedding cycle has started, which is before winter and summer. During this point, your pooch will be shedding its coat to prepare for the changing seasons. This is also the time when new feathers will grow.

Grooming a Golden Retriever takes a lot of time, effort, and patience. It involves a lot of fine-detailed work to ensure that you won’t damage the fur. To make sure that you’re up for success, you should keep these added tips in mind:

A: No, Golden Retrievers are not born with feathering. This coat feature will usually grow between the first 3 and 8 months of your dog’s life. Some Goldies will take longer to grow their feathers, especially short-coated, Canadian types.

Q: Why is my Golden Retriever’s hair curly?

A: A wavy Golden Retriever hair is a genetic thing. Most of the time, this is a normal occurrence and will go away as your dog grows older. However, if your Golden Retriever’s coat is getting curlier over time, you should check if it’s really a purebred. Chances are you’re given a Goldendoodle, a cross between a Golden Retriever and a Poodle.

Q: Will my Golden Retriever’s feathers grow back?

A: Yes, no matter how you trim your Goldie’s feathers, it will grow back. This is the reason why you should trim it periodically. It will help manage your pooch’s coat and prevent it from harboring dirt and getting matted.

Q: Is it good to shave a Golden Retriever’s feathers?

A: You should never shave a Golden Retriever’s feathers clean. This light and soft fur help regulate the pooch’s body heat. It comes in handy during colder seasons when the dog will need an extra layer of protection. All you have to do is trim the feathers to keep them from touching the ground and getting dirty.

Q: Why are my Golden Retriever’s feathers so short?

A: Golden Retrievers come in different types. Each type has a specific coat characteristic. For example, a Show Golden Retriever has longer and more visible feathers than a Red Tail Goldie. Still, this variation is subtle so both dogs remain fluffy and double-coated.

Q: How short should you cut a Golden Retriever’s hair?

A: Most professional groomers will recommend leaving at least one inch of fur. This way, you won’t trim too close to the undercoat. It’s the reason why you should use the right dog hair clipper with the right blade guard. This prevents over-trimming, which happens when using a pair of scissors.

Trimming Golden Retriever feathers is important to keep it at an ideal length. This will prevent dirt and smell from harboring on these silky fur. Overall, it’s easy to trim a Goldie with the right practice, proper tools, and consultation with a professional groomer.

Have you tried trimming your Goldie’s coat before? How did it go? Share your experience with us!

Tom Thorpe has overtime interacted with different species of dogs mostly through breeding and training; according to him, man’s best friend is yet to find solace in the company of man, as they are continuously mistreated. He, therefore, runs a rescue center that provides shelter to stray dogs, and has been advocating for the rights of animals; the Golden Retriever dogs are among his favorites, the reason he came up with the extensive excerpts to help educate the society on the right treatment and care of the respective breed. Tom spends most of his time running his dog shelter; he is a husband and proud father of two boys and loves to go fishing during his free time.
Previous Golden Retriever Ear Mites – Important Things to Remember!
Next Golden Retriever Ear Shape and its Purpose