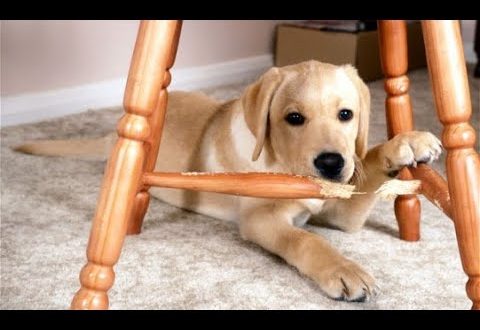 Why Does My Labrador Chew Everything?

Did you know that Labradors love to chew? It’s in their nature and something that owners have come to expect over the years. But why do they chew on everything and anything with a nubbin, including your new shoes and favorite handbag? And what can you do about it? Let’s find out!

Possible Reasons Why A Labrador Love To Chew Everything

Labs are born to be chewers. They have a high energy level and love to play, which means they need an outlet for all this energy. If your Lab is chewing things and making you crazy, you are not alone. The first thing that needs to be done is to determine the cause of this behavior. Check the list below.

When your puppy is teething, he or she will chew on things to relieve the pain that comes from growing teeth. When a puppy’s teeth are sharp and new, they can cause damage to furniture and other items in the house. It’s important to provide your pup with appropriate toys so you can avoid having to deal with ruined items.

It’s also worth noting that puppies often bite their paws during teething, this is normal too!

Behavioral problems may be causing the chewing. Your Labrador could be bored, stressed, or experiencing separation anxiety. They also might be showing off dominance or poor training techniques on your part. Your dog could be teething as well which can cause them discomfort and pain that they may try to alleviate by chewing up items around the house.

A change in the environment is a major source of stress for Labs, so if you recently moved into a new house or apartment with your Lab, he may be feeling unsettled. If it’s been raining more than usual in your area, there’s a chance that this could be causing also your Lab to chew on things.

A new person or animal in the household can also cause stress. It might not just be the change itself but also the smell and sounds that are bothering him.

If your Labrador is bored, it will find something to occupy itself. If that something is a couch cushion or a pair of shoes, then you have a problem with your hands! Labradors are very intelligent and active dogs who love to be around their owners, so if they’re left alone for long periods of time they can get bored and destructive.

You should try not to leave them alone for more than four hours at a time unless you have someone trustworthy watching over them or giving them plenty of exercise during that time period. You can also take them on walks with other dogs in the area or find an activity where they need to be active such as going outside in the yard to play fetch or Frisbee-ing with one another (they’ll love this!). Or maybe just go for a run together? That will certainly get their blood pumping!

If possible, having multiple toys available for playtime is ideal. This way there will always be something new waiting for them when they’re finished playing with what’s currently getting all the attention from their chewing habits.

If your Labrador is chewing on things when you are not home, it may be due to separation anxiety. This can be a serious problem for your dog, who may feel very anxious or even depressed when left alone.

If it gets bad enough, they’ll start to chew on furniture or anything else they can get their teeth into because they’re nervous and anxious without their owner around. This will only make them feel worse. Try to figure out what’s causing the separation anxiety first so that you can treat it appropriately (and avoid having your house destroyed).

🟩 Showing off the dominance

You might have noticed that your Lab has a tendency to chew on things when you are gone. This is probably because they are trying to assert their dominance over people, other dogs, and other animals in the house. When we leave our dogs alone for long periods of time, they feel like we are abandoning them, which makes them feel insecure about their place in our household. To remedy this feeling of loneliness and insecurity, some dogs will chew on objects around the house to show us that they’re still here, and still in charge!

A common theory is that your Lab chews everything because he wants attention from you or another family member. For instance, if he chewed up a pair of shoes belonging to one of his owners, then that owner would spend more time looking for new shoes rather than ignoring their puppy with love as usual.

One thing that can make a Labrador continuously chew things is that it was not trained properly. You can train your Labrador to stop chewing things. The first thing you need to do is find a good chew toy for him and let him know that it’s okay for him to chew on this toy, but not on anything else. Most labs will be happy with one or two chew toys that are used frequently.

You can also teach your labrador not to chew on furniture by explaining to it that this is disrespectful behavior and that it needs to learn how much better life is when he treats possessions with respect (and doesn’t eat them). You could say “dude” or something like that while you’re training so it feels more natural. If necessary, use a firm voice when correcting bad behavior and make sure there’s some kind of reward system involved. You don’t want his sense of self-worth to get too low!

How To Train Labrador Not To Chew Things?

Labrador is a very friendly and active dog that loves to play with people, but sometimes the Labrador can be too much. If your Labrador is a puppy then it will surely chew things all over your house or even outside if you let him out. You need to train him not to chew things by using some techniques mentioned below:

1. Remove things that you don’t want to be chewed

This is the most obvious tip and a very important one, but many people overlook it. If your Lab tends to chew on things that are not supposed to be chewed, then you need to remove them from his reach or destroy them completely so that he won’t think of chewing them again. If your Labrador likes nibbling on furniture and shoes, then you need to get rid of these items before they become damaged by your dog’s teeth or by their smell rubbing off onto other objects in the house.

2. Try to give toys or mental stimulation games

If your Labrador is bored, it may chew on things to pass time. If this sounds like your dog, try giving it some mental stimulation games or puzzles that will keep its brain active so it doesn’t have time to chew on other things.

You will want to make sure that whatever you give your Lab is safe and not harmful in any way. This includes making sure it doesn’t have any pieces or parts that could be swallowed as it chews on it because these can cause problems later if they end up being ingested by mistake while chewing on them (especially since this happens often when dogs are playing with toys).

Also, keep in mind whether or not any chemicals were used in making it. So if possible, try choosing something organic rather than manmade materials which may contain toxins such as lead paint or cadmium fumes from glues used during manufacturing processes. Both of these are toxic when ingested orally by dogs over long periods of time!

4. Provide lots of food and water

Labradors like to chew because they’re hungry. If you don’t feed them enough, they’ll look for something else to eat, and that can be anything from the couch cushions to your shoes. Feed your dog at regular times so he knows when it’s time to eat. And make sure he gets plenty of water! A dehydrated Lab is a bored dog who’ll find something else to do with his time, like chewing on things he shouldn’t be chewing on.

5. Train him to leave chewing things

When you catch your Lab chewing on something, say the command that you have been teaching it. If it stops chewing immediately and moves away from the object, reward your Lab with some tasty treat. If it does not respond appropriately or continues to chew on the object despite your command, do not reward it. Instead, keep telling him to stop what he’s doing until he finally listens and leaves the item alone.

If you want to stop your Labrador dog from chewing, then there are many things that you can do. You need to attend to this as quickly as possible since this will also affect other behaviors in the dog. It might not be easy to solve the problem in the early stages, but it gets easier over time. All you need is a good plan and the determination to stick to it.

Tom Thorpe has overtime interacted with different species of dogs mostly through breeding and training; according to him, man’s best friend is yet to find solace in the company of man, as they are continuously mistreated. He, therefore, runs a rescue center that provides shelter to stray dogs, and has been advocating for the rights of animals; the Golden Retriever dogs are among his favorites, the reason he came up with the extensive excerpts to help educate the society on the right treatment and care of the respective breed. Tom spends most of his time running his dog shelter; he is a husband and proud father of two boys and loves to go fishing during his free time.
Previous Why Is My Labrador Barking So Much?
Next How Long Does Labrador Retriever Live? See Here!